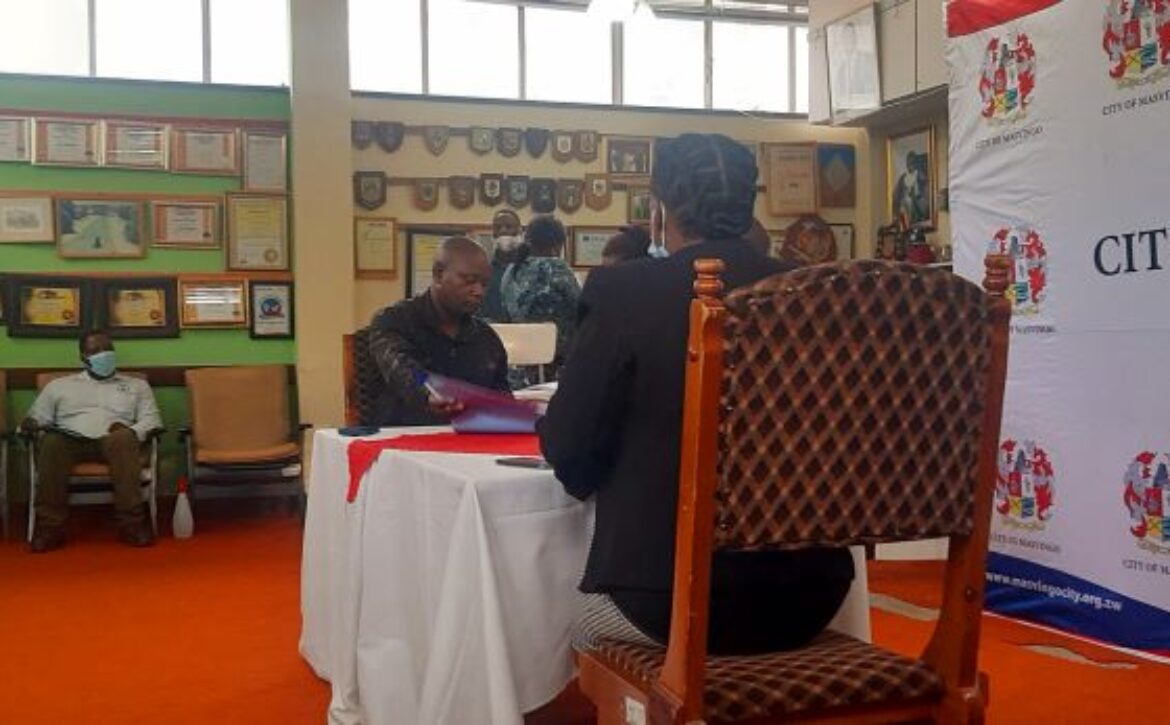 City of Masvingo Signs 2022 Performance Contracts with its Directors

The City of Masvingo held a 2022 Performance Contracts signing ceremony on the 25th of March 2022 at its Civic Centre Offices.

This comes as part of the efforts at ensuring that Directors live up to their tasks and in fulfillment of the City of Masvingo’s mandate.

The 2022 Performance Contract signing ceremony took a different dimension as it was signed in the presence of His Worship, The Mayor, Deputy Mayor and councillors.

Eng Mukaratirwa who is the accounting officer for City of Masvingo will ensure that departments comply with the signed performance contracts every year for monitoring and evaluations purposes and to fulfill the key performance indicators.

The performance contract signing ceremony started with a Departmental Integrated Perfomance Agreement. All Directors attended and signed their respective documents upon which their work will be evaluated in the ensuing year. 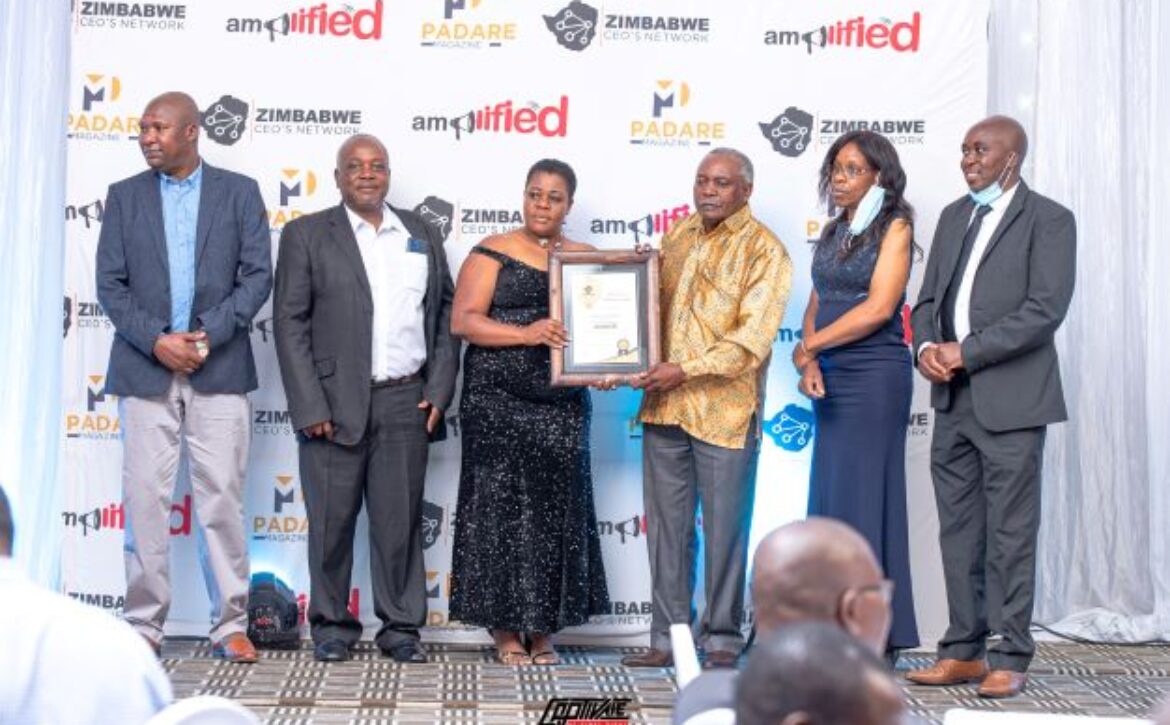 City of Masvingo a shining light of service delivery

The Zimbabwe CEO’s Network awarded City of Masvingo ‘Best Performing Award’ on February  25, 2022, at Miekles Hotel in Harare. This honour is awarded to municipalities doing the most in the following sectors: service delivery, social upliftment, attract foreign investment, clean environment, develop and enhance infrastructure over the past 12 months within their municipal boundaries.

The Town Clerk, Eng Edward Mukaratirwa, also tops the shortlist and was awarded the most proactive and outstanding Town Clerk.

City of Masvingo  was recognised as one of the entities that have created jobs, attracted investments, combated crime, and promoted social upliftment.

This was certified by a shield which was received at the recent Zimbabwe CEO’s Network Awards. 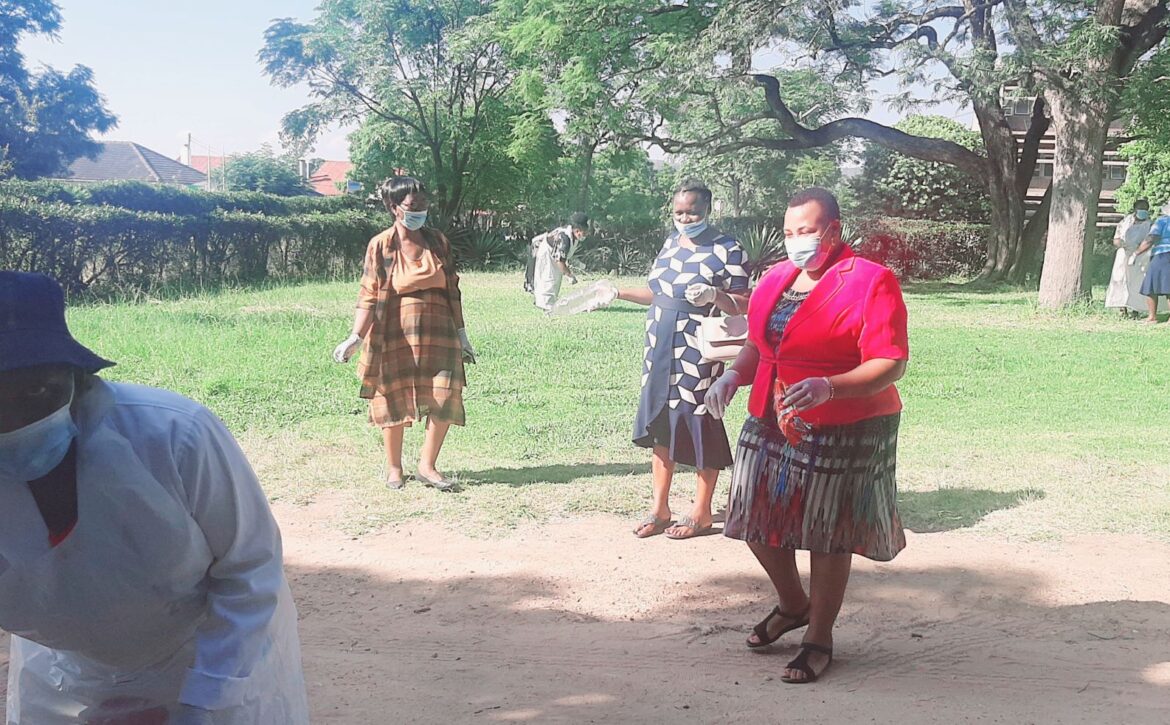 The City of Masvingo staff spent two hours on Friday the 4th  of March 2022, from 8 am to 10 am picking up litter and cleaning their immediate and surrounding environments.

The campaign, which was organized under the auspices of the Department of Health services began with a presentation from the department on the importance of having clean environments, before participants proceeded to Leopold Takawira Bus Terminus and surrounding areas to pick up litter.

Speaking during her presentation, Environmental Health Technician, Mrs Fungai Mataru  highlighted that as part of ongoing efforts to ensure a healthy and clean City, the department had scaled up efforts through formulation of health clubs to help reduce uncollected waste and minimize waste dumping.

Running under the theme ‘Working together for a Clean and Healthy Environment’, the clean-up campaign was part of wider efforts by the City of Masvingo to conscientize local communities of the health dangers posed by improper waste disposal.

December 5, 2018, marks the day when His Excellency, President E.D Mnangagwa declared every first Friday of each calendar month as national Clean-Up Day. Thus recognizing the Constitutional Mandate to uphold environmental fundamental rights and freedoms provided for in section 73 of the constitution of Zimbabwe the ‘right to an environment that is not harmful to tier health and well-being’. 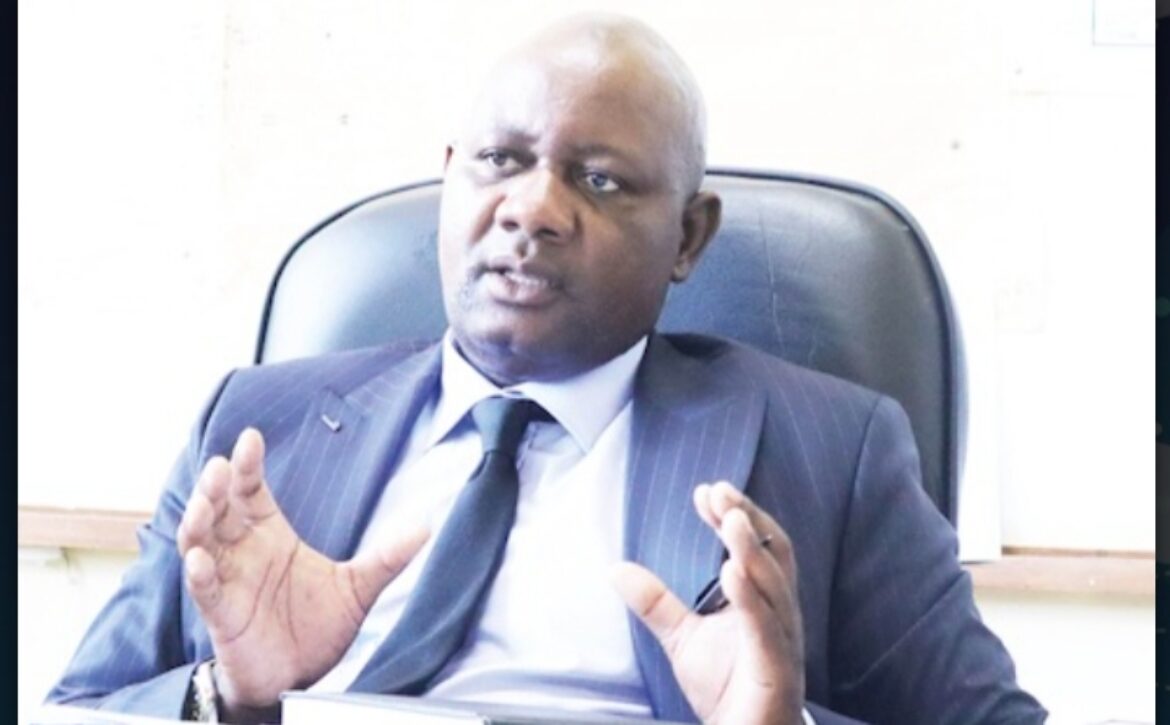 Eng Mukaratirwa scooped an award or demonstrating an exceptional commitment to the business professional through conduct of meta-analysis and profundity thoughts.

“To honour the efforts in rural and urban development, we are recognising the contributions of Eng Edward Mukaratirwa the Town Clerk for City of Masvingo for outstanding performance in growth of smart cities”, Zimbabwe CEO’s network.

Adding to that he holds professional membership to Engineering Profession bodies both locally and regionally. He is Professional Engineer with the Engineering Council of Zimbabwe, a Corporate Member of Zimbabwe Institution of Engineers and member of Water Institute of Southern Africa.

In recognition of his outstanding  work, he has received several prestigious awards. Prior to his appointment as the Town Clerk of City of Masvingo he was Deputy City Engineer and has been instrumental in the implementation and fulfillment of several projects within the city.

Preceding his role as the Deputy City Engineer he was Chief Executive Officer for Gutu Rural District Council and instrumental in its growth.

He is a holder of the following qualifications: 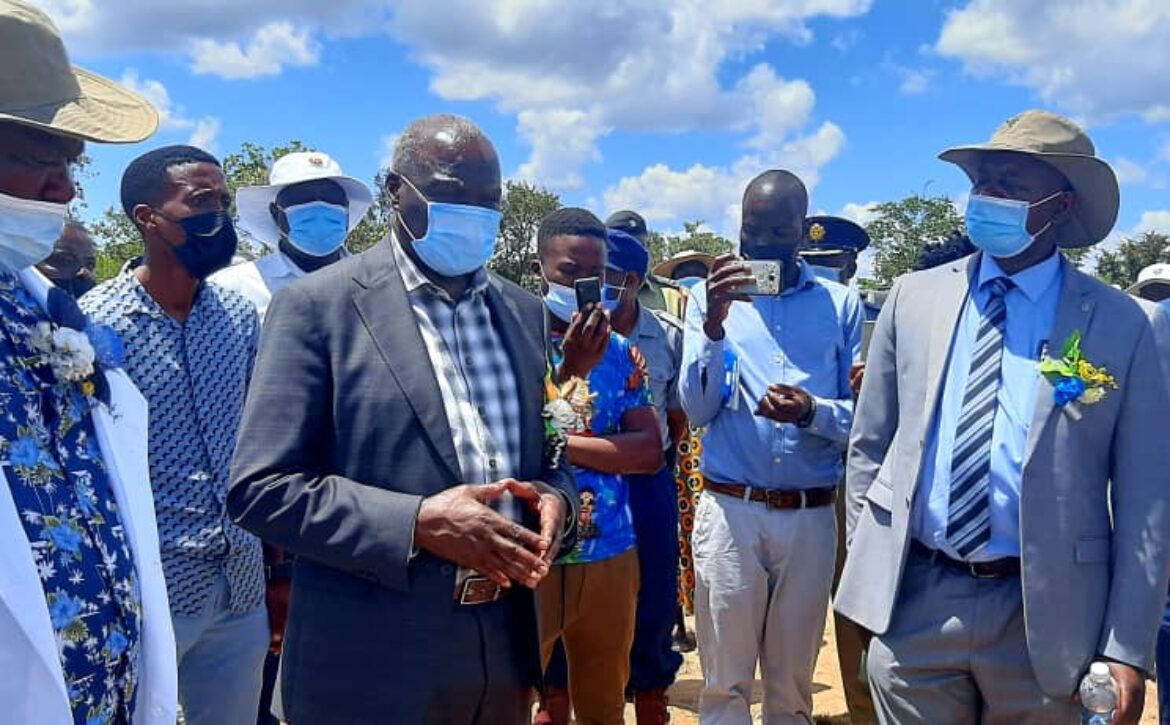 Minister tours and assess progress on City of Masvingo projects

This was to assess on progress of Masvingo City Council’s projects funded from the Devolution Funds, ZINARA and Council coffers.

“We have to see what is happening on the ground, we will be able to see what the City of Masvingo has done, what it still needs and how we can progress,” he said.

The Minister’s entourage toured the roads which were rehabilitated under the Emergency Roads Rehabilitation Programme 2 (ERRP 2), the new landfill in Cambria Farm on a piece of land that was issued to City of Masvingo by the government, recently completed Runyararo North West clinic and officially opened Rujeko Secondary School

In his welcome address, His Worship the Mayor, Cllr Collen Maboke acknowledged the support of the parent ministry as well as support of the office of Minister of State for Provincial Affairs and Devolution in the infrastructural development in the City.

“Most of the sites visited were supported by government, Masvingo is privileged to be continuously receiving financial and material support from the government (devolution funds, ERRP 2 and Cambria farm for landfill waste management project) and we don’t take it for granted”, he said.

“It is a clear recognition of the centrality of our Council to the overall strategy of achieving NDS1 and vision 2030”, Cllr. Maboke said.

The City of Masvingo’s infrastructure development drive is in line with the Ministry of Local Government and Public Works’ vision of embracing the smart city concept. 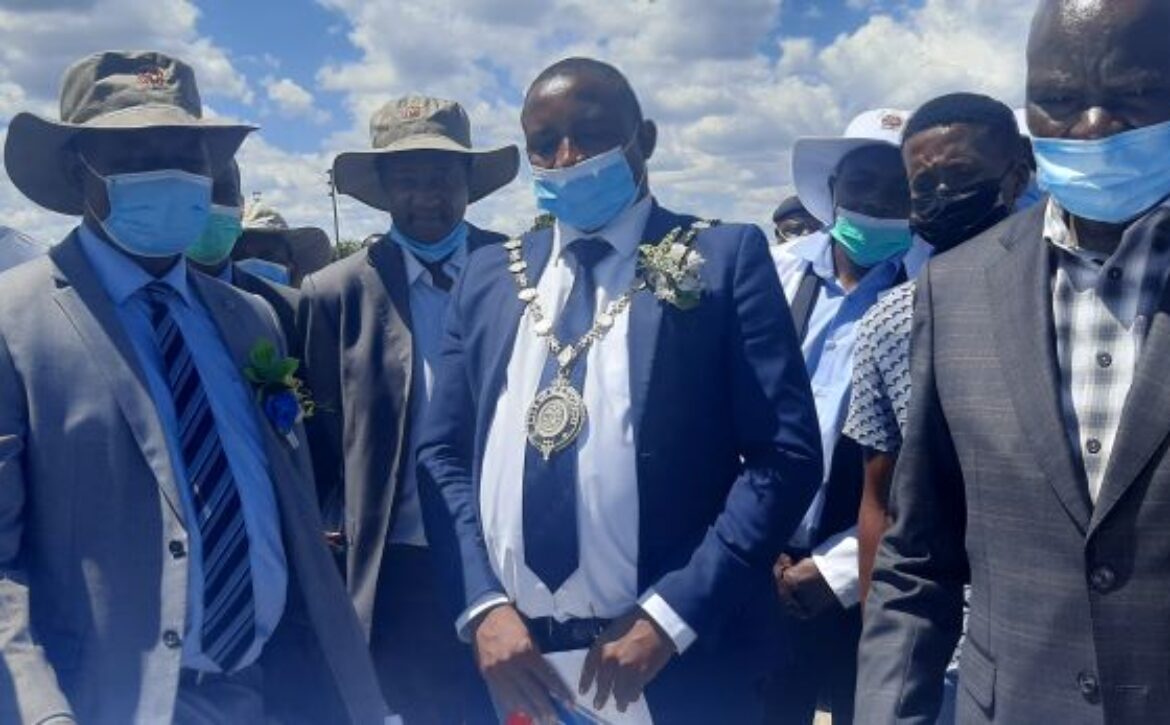 The secondary school is not only the first in the history of Masvingo City Council but most local authorities in the country.

Minister July Moyo applauded Masvingo City Council for raising the bar high and setting the pace for other local authorities.

“  I am very appreciative for such an initiative taken by Masvingo City Council.  Not all local authorities have built secondary schools as most focus on constructing primary schools.

This noble idea is in sync with the government’s National Development Strategy 1 and vision 2030 wherein amongst some of its key priority areas, social services provision is key.  As you might be aware, vision 2030 fulfills some of the sustainable development goals and this project is direct confirmation of Council’s efforts to achieve sustainable development goal no. 4, which is quality education”, he said.

The new school opened its doors this month on the 14th of February 2022 with an initial enrolment of 220 form one pupils. The first 2 blocks of the school and ablution facilities were constructed at a cost of ZWL 18 million.

November 17th , 2021 marked the historical and first ever, Passing Out Parade consisting of 20 Municipal Police Constables at City of Masvingo.

The Honourable Minister of State Affairs and Devolution for Masvingo Province, Cde. Ezra Chadzamira was proud to congratulate 20 new Municipal Police Constables. The Minister in his feature address reminded the new officers that service to God is service to mankind. He urged them to always serve the City of Masvingo with pride and distinction.

His Worship, the Mayor for Masvingo City Council, Cllr C. Maboke  took the opportunity to remind guests of the importance to follow the City’s by-laws for the development of the city. He went on to say that a strong police presence will be seen throughout every corner of the city and that the aim is to train and deploy more
municipal police officers on the streets to ensure that citizens feel that sense of safety as they conduct their daily activities.

“Today that mandate has started to come to fruition with the passing out parade for the first batch of 20. The next batch will begin training early next year”, he said.

Minister Chadzamira also reminded the Constables, that they all had two ears and one mouth, which means, while in the course of their duty they should be mindful to listen more and talk less; to be motivated, show commitment to service and professionalism as they interacted with the public. He urged them to always remember how much pride they felt as they paraded before family and friends today and to carry that respect and pride in their daily duty.

Provincial Development Coordinator, Dr Jefter Sakupwanya and members of the Masvingo Province JOC were also in attendance to take the salute along with Minister Chadzamira. They all reiterated the beliefs of Minister Chadzamira who urged the graduates to serve their city with honesty and warned them to be weary of corruption and corrupt practices. They were advised to never abuse their authority nor contribute to any activity that would bring the Municipal Police Service into disrepute.

The City of Masvingo Mayor’s Christmas Cheer Fund which was launched on the 20th of October 2021 was off to a good start, appealing to the corporate world and making a compelling case as to how the donations will have a tremendous impact on the less privileged members of the Masvingo society.

The launch of the cheer fund which has became an annual event is going to be followed by a fundraising golf tournament with a set target of of US$ 5000, on the 24th of October 2021. Historically, charities have always seen an increase in donations around festive period, referred to as the ‘December effect’, an ideal time for fundraising for the less privileged and give them a festive cheer.

The community embraced the season of good will and the donations will help in the continuity of the Mayor’s office’s efforts to assist the less privileged members of the community.

Speaking during the launch, His Worship, Cllr. C. Maboke reiterated the need for members of the community to answer to the plight of the less privileged. ‘I therefore call upon each and everyone of us to come forth and make sure that we assist each other to shape our future and our city’, he said. 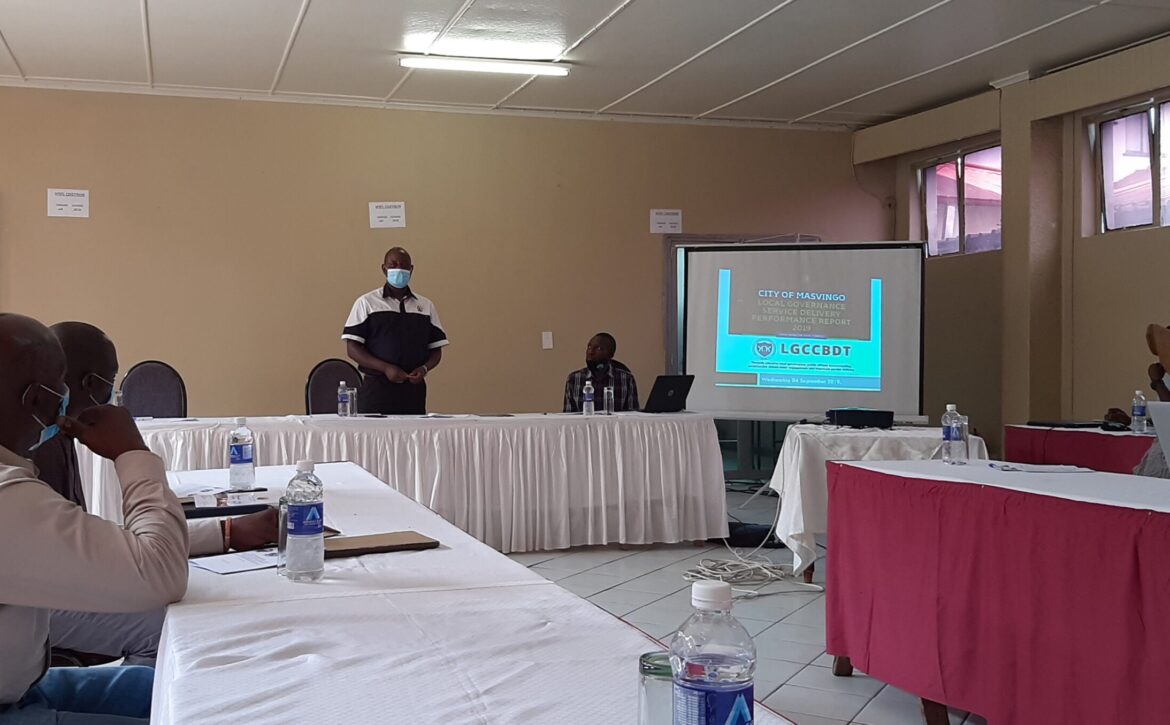 Masvingo City Council (MCC), the Local Governance Trust (LGT) and Masvingo United Residents & Ratepayers Alliance (MURRA) are increasingly recognizing the added value that greater partnership working between the residents body and Council brings to the vital services we provide and the communities we serve.

The strategic synergies have enabled an improvement in service provision in the city, through enhancing Masvingo City Council’s Service Delivery Charter. The three parties have made notable strides in enhancing the Service Delivery Charter’s functionality and connect it with citizens’ obligations, by inclusion of a section that captures the Service Standards. The standards will enable Council and citizens to track service commitments made during the service delivery charter development process. 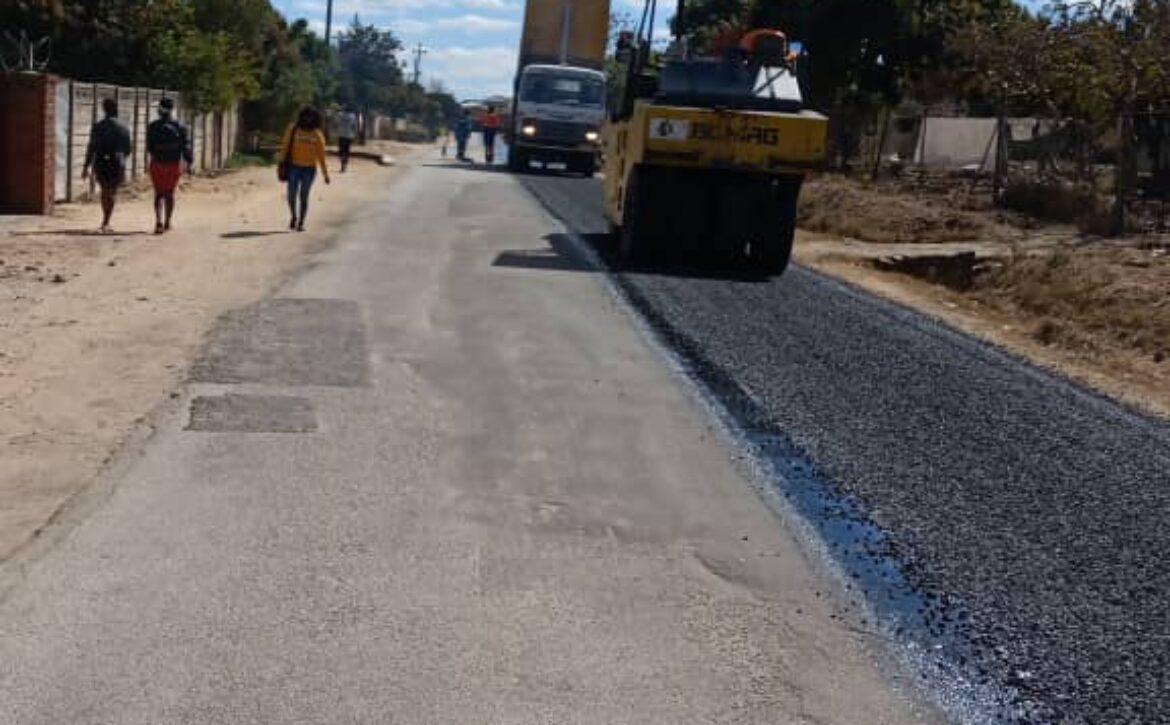 City of Masvingo was allocated and received $77 million from the Zimbabwe National Road Administration (ZINARA) towards the road rehabilitation exercise and to date 69 roads across the city have been completed.

To date, Council has made significant inroads on road rehabilitation exercise following heavy rains during the 2020-2021 rain season which left a trail of destruction.

There was also re-graveling of 9.5 Km and the other roads which were attended to include; Zviitirei, E Gudza, Manhede, P Chatikobo, S Kanyemba, E Mukono, Tendai Kubatana, L Mukaro, Davies Mugabe.

Council also attended to potholes and there was pothole patching of 84Km, a total of 62 roads.

According to the budget and timelines which were set for this year, 69 roads across the city were to be rehabilitated (re-sealing and re-graveling) and the targets were met.